From Jingzhi Pu Lab
Jump to navigation Jump to search

Our interests lie at the interface between theoretical/computational chemistry and biophysics. The current research in the lab is directed towards understanding how biomolecules perform their functions via dynamical motions that are encoded in their three dimensional structures. Ongoing projects include computer simulations of ABC transporters and development of combined quantum mechanical/molecular mechanical (QM/MM) methods. 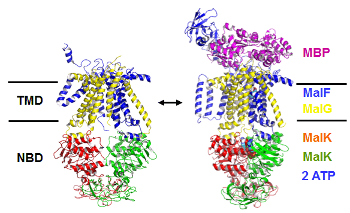 Many essential functions of living cells are performed by nanoscale motors consisting of protein complexes. The ability of these biomolecular motors to utilize chemical free energy to perform mechanical work makes them splendid molecular machines. Among various types of molecular motors, ATP-binding cassette (ABC) transporters represent a unique family of motor proteins that enable translocations of various substrates across cell membranes, by harnessing the free energy associated with ATP binding and hydrolysis.[1] Dysfunctions of ABC transporters have been linked to a number of diseases, including cystic fibrosis, the most common fatal hereditary disease in the US. Over expressions of certain ABC transporters are also known to contribute to multidrug resistance of tumor cells after cancer patients receive chemotherapy. Making using multiscale computer simulations, our project aims at obtaining a deeper understanding of conformational dynamics, enzyme catalysis, as well as the chemomechanical coupling mechanisms under which the chemical free energy is converted into mechanical work in ABC transporters. Currently, we are focusing on the elucidation of ATP hydrolysis mechanisms in several ABC systems.[2] 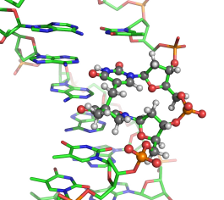 In scarce of nutrients, certain bacteria form endospores, which protect bacterial DNAs from various environmental damaging factors, including UV radiation. It is well known that UV radiation can damage DNAs by forming cross-links between adjacent Thymine bases (TT) in a DNA strand. Under regular cellular conditions, such UV-induced damage leads to the formation of cyclobutane pyrimidine dimer (CPD) as the dominant photoproduct. In spores, however, the DNA photoreaction pattern is altered such that a special lesion 5-thyminyl-5-6-dihydrothymine, or commonly known as the spore-photoproduct (SP), becomes the most prevalent form of TT damages. It has been postulated that SP lesions are formed in a well-controlled manner such that the bacterial DNAs are "locked" at a chemically inert state until spores progress to the germination phase, during which these lesions are repaired faithfully by a specialized enzyme called spore-photoproduct lyase (SPL). Despite this widely accepted overall scenario, the precise mechanisms of how SP is promoted to a major photoproduct in spores and how the SP lesions are recognized by SPL for repair remain largely unknown. Collaborating with Prof. Lei Li, we have computationally characterized several dinucleotide analogues of SP[3][4] and are currently developing all-atom models for simulating short segments of SP-containing DNAs. 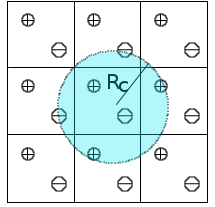 The IPS method: interactions are computed explicitly up to a cutoff distance Rc. Beyond that an average potential is used.

We are exploring new approaches to include long-range electrostatic interactions in combined quantum mechanical and molecular mechanical (QM/MM) calculations. Traditionally, long-range electrostatics in molecular simulations can be treated by lattice sum methods such as the Ewald method, where Coulomb interactions are collected over periodic systems such that contributions from all particles as well as their periodic images are taken into account without making any truncation. The Isotropic Periodic Sum (IPS) method[5][6][7][8] has been developed as an efficient alternative to the Ewald method. In the IPS method, pairwise interactions are only computed in a local region defined by a cutoff distance, where the long range contribution beyond the cutoff distance is treated with a mean field theory by assuming an isotropic distribution of the image particles. To date, the IPS method has been formulated and applied to classical systems that are described by pure molecular mechanical force fields. We are currently developing computer codes to extend the IPS method to treat systems described by combined QM/MM potentials.[9] This work is expected to lay the foundation of applying the IPS method to enzyme simulations. 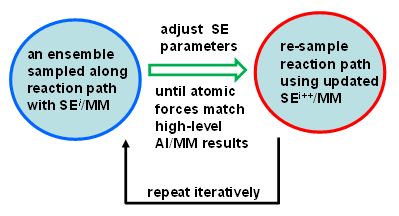 The RP-FM strategy: sampling is carried out on efficient SE/MM surfaces and then SE-SRPs are optimized to reproduce AI/MM atomic forces.

The holy grail of simulating chemical reaction mechanisms in condensed phases and biological systems (e.g., enzymes) is to obtain free energy profiles through sufficient statistical sampling of accurate ab initio (AI) quantum mechanical (QM) potential energy surfaces (PES). The computational costs associated with AI calculations, however, make directly sampling such PESs practically infeasible. More efficient but less reliable alternatives, such as semiempirical QM (SE) methods, are often chosen over AI methods in QM/MM simulations to achieve the efficiency required for sampling. Inaccuracy of an SE method in a specific reaction situation can be compensated by tuning the method against AI benchmark data to obtain a set of specific reaction parameters (SRPs).[10] The traditional way of fitting SE-SRPs based on gas-phase model systems, however, may suffer from a number of limitations, making transferability of the resulting SRPs difficult to control when they are employed in condensed-phase simulations. Thus, how to obtain reliable SE-SRPs has posed a long-standing challenge to the field of computational enzymology.

To address this challenge, we have recently proposed a new SRP-fitting strategy, named Reaction Path Force Matching (RP-FM),[11] with which SE methods are directly reparametrized against AI methods in condensed-phase QM/MM simulations. The RP-FM procedure features cycles of (a) sampling configurations along a reaction path on an efficient SE/MM PES; and (b) adjusting SRPs in the SE method by force matching to reproduce the atomic forces at the target AI/MM level. Iterative applications of the RP-FM cycle make it possible to reach the accuracy of AI/MM simulations without explicitly sampling the computationally expensive AI/MM PES. We have demonstrated the effectiveness of the RP-FM strategy on simulating a proton transfer reaction in the gas phase and in solution. Extension of the RP-FM method for simulating enzymatic reactions is currently underway.